I have always wanted to try to make carnitas. I found this great recipe that uses pork loin to make the dish healthier on Health Food for Living a couple of weeks ago. I was of course intrigued by the idea of using the leaner loin meat in lieu of the fattier shoulder meat I usually use when making pulled pork.

Now, my original idea was to make tacos in typical fashion, but I was cleaning out one of my cupboards yesterday and happened across the bags of masa and husks. Inspired to make tamales (it has been quite some time since I last did) I decided to combine the two into carnitas tamales with golden beets. 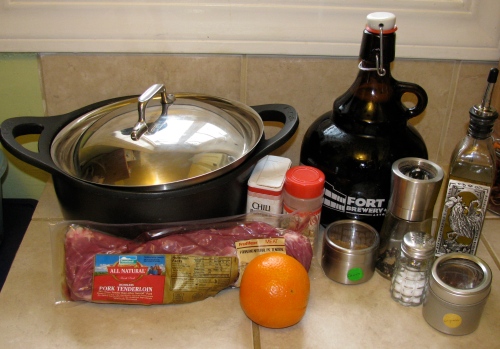 Mix flour with baking powder and salt. With your hands mix in the Crisco until the mixture is well combined. Add in water until the dough is moistened through but dry enough that you can easily handle the dough. Combine all ingredients very well. Cover with plastic wrap until you are ready to use. 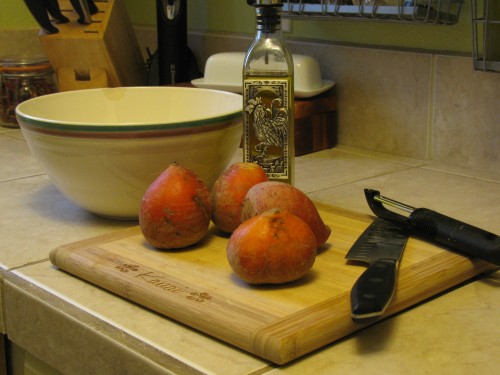 Disregard that the photo has four beets in it. I prepared four beets but that was way too much! Only do two. Preheat oven to 400 degrees. Peel beets and rinse. Cut them into strips. Place in a bowl and toss with olive oil. Pour beets out onto cookie sheet and cover tightly with foil. Place in oven for 45 minutes. After 45 minutes turn oven off and leave beets in there for 15 more minutes. Remove and uncover.

1/2 C shredded cheese of choice, I used goat cheese gouda because I had some left over

Assembling and cooking the Tamales:

Prepare the husks by filling them with masa. You want to put an even layer in the middle of the husk and avoid getting to close to any of the edges. You will use about a ping pong sized ball for each husk. Also, don’t fill it too full, you need to be able to roll it up and tie the ends. 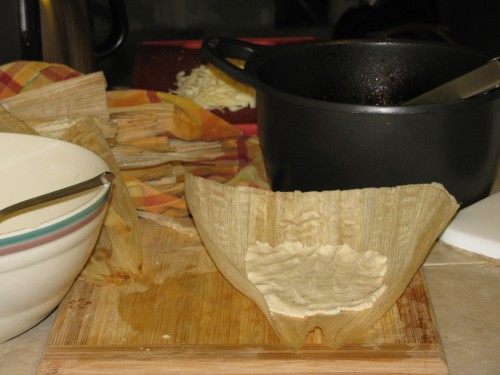 One at a time put a tablespoon of meat, a couple of beets, and about 2 teaspoons of cheese in each prepared corn husk. Roll up the tamale and tie off each end.

When all are prepared placed a bamboo steamer in 2-3 inches of water in a large stock pot. Boil the water and fill the bamboo steamer with tamales, be sure not to overload it, you will have to do several batches. Cook the tamales for 15-20 minutes, until the masa pulls away from the husk cleanly. 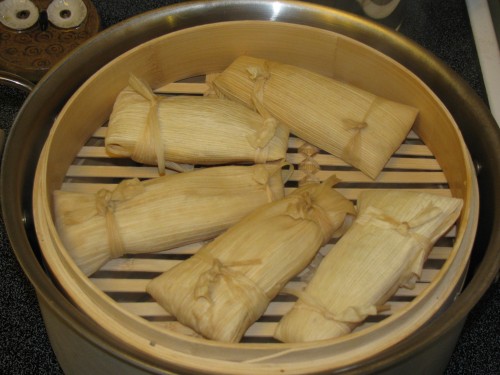