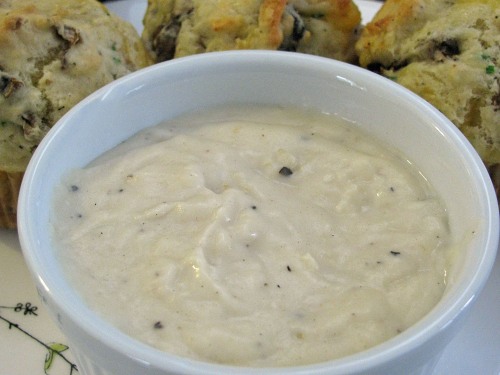 This is a basic white gravy that I use as the base for any cream sauce I am going to make. It is fundamentally like a béchamel and also fundamentally different. It includes all of the same ingredients as the french sauce base, but it is a lot easier and much less time-consuming. It is also easily scalable to suit your size needs for any meal. I use this base for sausage gravy, herbed gravy for pork chops, plain pepper gravy, mushroom gravy, and on and on. This is even the same process I used for the Parsley Sauce I made for the albacore a while back, that one was just thinner as it was being applied as a sauce, not a gravy.

I have practiced this recipe many, many times. I have made lumpy sauce so many times I cannot even estimate, I have made runny sauce just as many times. It takes practice to make good sauce and gravy, but once you get it, it makes a big difference for so many meals.

This recipe is enough gravy for four people to have biscuits and gravy and probably 6-8 to have on protein as a sauce for dinner.

6 T butter (you can also use bacon fat, sausage drippings, duck fat, etc — I generally mix butter with the fat from whatever meat I am cooking for the meal)

Melt butter/fat over medium heat. Using a rubber spatula add flour a bit at a time, combining with butter to make a smooth paste, or roux. The consistency of the roux should not be dry and crumbly. You want the butter to be completely absorbed but for the flour to be smooth. Add flour just until it starts to ball up, up to 1/2 cup. And remember, if you get heavy-handed with the flour and it is too dry, add a little more butter.

Cook roux over medium heat, stirring constantly to avoid burning, for about 3-5 minutes. The roux will begin to brown as the flour cooks.

Using a whisk, add milk on cup at a time combining with the roux between additions. Make sure the roux smooths into the milk so that you do not get lumps. You should turn the burner heat up to medium-high as you do this to encourage the mixture to lightly boil and thicken. Continue adding milk as the mixture thickens, allowing it to boil and thicken between additions. Whisk nearly constantly to avoid lumping and to keep the roux mixed well with the milk. Avoid adding the milk too quickly or it will take a long time to tighten back up. Adding only one cup at a time ensures that you don’t add too much and also that you maintain a consistent thickness.

Reduce heat back to medium and add flavor by the way of salt and pepper. You can also add herbs at this time or sautéed mushrooms, cooked sausage, etc. Stir regularly to avoid burning. If the sauce is too thick you can add more milk just 1 T at a time (unless it is really thick and tight, then do 1/4 cup). Remove from heat and serve.

A note: do not add flour to the gravy once you have added milk. The flour taste will never go away if you do this. The purpose of cooking the roux before you add any milk to cook the flour and take that raw flour taste out of the dish. If you get too far into the gravy and decide you need more flour, you can make another roux in another pan and add it to the gravy, mixing to combine but this is risky because you could end up lumpy. My suggestion is to stop adding milk, remove the gravy from heat and allow it to set up, it will thicken a little.

Filed under Sauce and Gravy