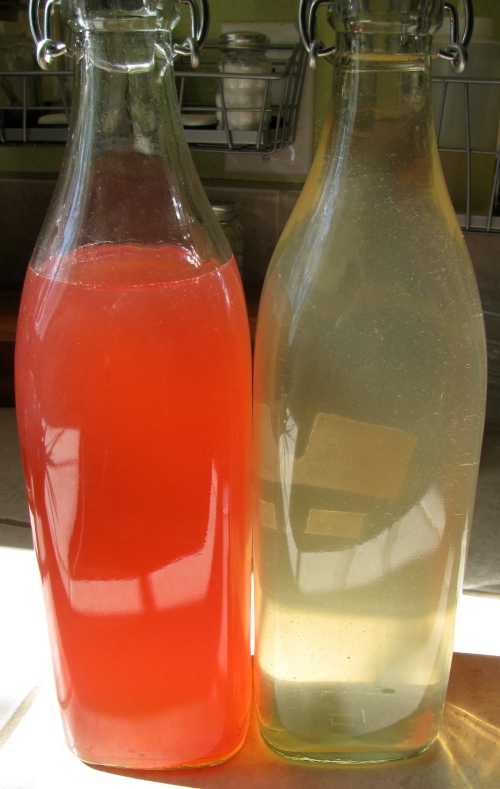 So we started making kefir water last month. It seems to be going well. Still looking to experiment with some different sugars and flavors but we have created one staple flavor and have an experimental flavor that turned out well that I want to share.

Combine and store in an air tight container in the pantry or refrigerator.

Combine and store in an air tight container in the pantry or refrigerator.

So easy and so good!

This is three days late, Sorry! The sarsparilla extract still tastes very much of vodka, but the sarsparilla flavor is very prevalent. It also smells very good on my hands after the alcohol evaporates. Once the stuffy nose that the hubs and I both have goes away we will give it a try with some water kefir and let you know what we think.

Filed under Beverages, Dairy Free, DIY, Outside of the Box, Vegan, Vegetarian

After two weeks the sarsparilla root extract tastes about how the vanilla extract would taste. The flavor of the sarsparilla is there and strong, but the flavor of the vodka is still quite present. I am going to let this go another four weeks and report on it again. So check back on March 3. However, overall the flavor is earthy and unique. I think this is really going to turn out well and I will likely start a larger batch in the mean time so that it is ready close to this test batch.

The hubs is still drinking soda with his cocktails, zero calorie soda no less, which is just terrible for you for a myriad of reasons. I have been trying to wean him off the stuff, but this is going to continue to prove difficult until I find a replacement that likes equally as much. I made this Cream “Soda” replacer and he really liked it, so much so that he started thinking of other replacements. Last week, while at the home brew store, he got some Sarsparilla Root, specifically Hemidesmus indicus, which is Indian Sarsparilla, which according to Wiki is from Southern Asia.

I treated it just like the vanilla extract I had made last year. I added a heaping tablespoon to a 1/2 pint jar full of vodka, put a lid on it and gave it shake. It is now sitting in my pantry waiting to be tested. I will do my first test in two weeks. This was started on January 20th, so check back on February 3rd to see how it is tasting.

Ultimately, I will use this the same way I did the vanilla to make the cream soda replacement and we will see what the hubs thinks!

Let me preface, that this is not a soda. It is not carbonated, though it would be good carbonated and that could be achieved any number of ways. This is simply a concoction that I made that tastes like cream soda. I am working on weaning the hubs off soda when he is having cocktails. It is the only time he drinks the stuff, but it is still evil and nasty and should not be in our house. So I am on a quest to find a replacement. This recipe was a thought I had but I had no idea if we would drink it. Turns out he did and it got his brain going about other things we could make like this! Stay tuned for more to come.

This was as simple as adding 1 1/2 cups of water to a pint jar with 2-3 drops of vanilla (I use homemade, simple recipe – 1 cup vodka with 4 vanilla beans that have been cut and scraped, allow to sit for months), and 1 tablespoon of agave nectar. Put a lid on the mixture and shake to combine. Serve in place of soda. Should you want this carbonated you could add a little to flavor seltzer water. You could also make a big batch of this and keg it…